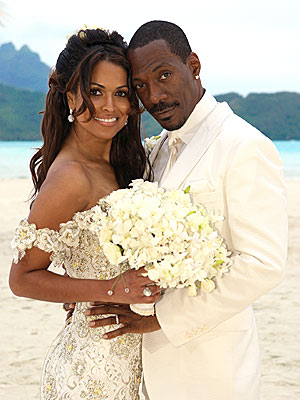 People.com reports that Eddie Murphy and Tracey Edmonds have decided to seperate.

The couple exchanged vows two weeks ago on a private island off Bora Bora in French Polynesia but it was later revealed that the marriage wasn’t legal, purely ceremonial. However it was reported that the Murphy and Edmonds planned to marry legally in the United States within a matter of weeks.

“After much consideration and discussion, we have jointly decided that we will forego having a legal ceremony as it is not necessary to define our relationship further. While the recent symbolic union in Bora Bora was representative of our deep love, friendship and respect that we have for one another on a spiritual level, we have decided to remain friends.”

Nothing but pure slackness going on here…. Eddie and Johnny need to come clean!